The Crooked Handle Brewing Company founders were introduced to brewing craft beer in 2008.  Weekends were spent together in a small garage on a horse farm crafting beers using nothing more than a couple of igloo coolers, a small kettle, and a propane turkey fryer.

As the passion for craft beer grew so did the “need” for larger brewing equipment aka “more stainless”.  Engineering, building, and testing continued until what is now known as the Experimental Brew Club pilot system was ready to transform barley into beer.   As the garage brewery grew so did the appreciation for the art and science of crafting delicious beers.  Of course, the best part of brewing is sharing those beers with family, friends, and anyone willing to give honest feedback.  Those were the times in Crooked Handle history now jokingly referred to as the free beer days!

What’s next for Crooked Handle…Stay tuned! 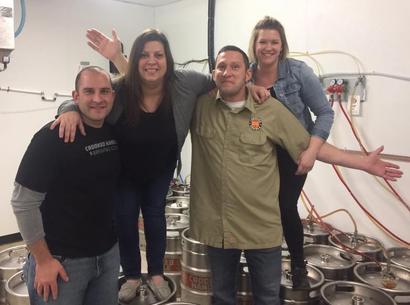 From left to right:

Crafting our passion since 2015